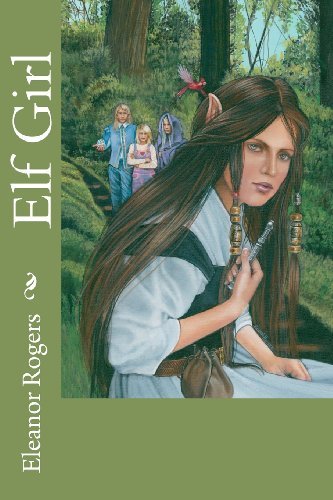 Lyris Radleck's normal school life is turned on its head when she learns that she's only half human. Worse, she has a destiny she never asked for and doesn't want: to save Dandelorn, her father's world, from a desolate fate at the hands of a vengeful goblin. Lyris refuses her assignment until a heart-wrenching event changes her mind. Lyris is challenged to survive in a natural world without stores or cellphone coverage - let alone electricity or running water. Plus, Lyris' older cousin Darla, who's completely human, has dropped into Dandelorn behind her, and Lyris is faced with the task of sending her home. When Darla falls in love with the debonaire goblin, priorities change. To prove that he would not only ruin Dandelorn - and the Earthworld - but Darla's life as well, becomes Lyris' biggest challenge. Only wits and strength of character will make a difference and protect her from her darkest foe: herself. Excerpt... Darla stopped short, her face one big scowl. Dirt smudged her cheeks; water dripped from her hair; her sopping, navy skirt clung to her legs; and her mud-stained blouse had lost even every hint of its former whiteness. ?What have you done, Lyris? Where are we?? Her voice wobbled, and I could tell there would be tears any second. ?We?re in Dandelorn. Where have you been? I?ve looked for you all day.? Should I hug her or something? Not convinced that it would help, I just added, ?I?m? so glad you?re okay.? With trembling fingers, she raked aside a clump of hair matted against her forehead. ?If you really want to know, I? I woke up to cats screaming. Hundreds of them. I couldn?t see them but they must?ve been? huge. Since then, I?ve been walking through a jungle? for hours. And I just fell into a pond of scummy water.? She grabbed the edge of her skirt. ?Just look at me! I?m covered in mud!? ?What happened to your blazer?? ?It? it must?ve come off inside that tornado.? ?Portal.? ?Whatever.? She clutched the blue stones around her throat. ?I keep seeing these funny bugs flying around? and?and there?s a jaguar back there. And something else? like out of a nightmare. A scarlet animal? sort of. Horrible looking. Its fingertip lit up and twirled at me.? A monster-in-the-closet type of fear glimmered in her eyes. Could only be Urzik. In which case, he was the one who?d zapped my friend Tam. ?W-hat did you do?? ?Pushed him into the pond. He screamed, and so I ran.? She slapped the mud on her blouse. ?I thought I was gonna be lost in this awful place forever. When do we leave?? I suppose I couldn?t expect her to say, ?Gee, Lyris. Sorry I thought you were talking crazy.? But it would?ve been nice. I scratched the itchy mark on my arm. ?I tried to tell you that I was go?? ?Where?s a place to clean up. Where?s the restroom?? We?d need to ease into this. ?Darla, hate to break it to you, but we?re in a different world. Things are more? natural here. The nearest restroom is that bush over there.? She stiffened. ?What are you saying?? ?Um? that you need to think Wilderness Training.? ?Really? Then where did you get those cute, patchy cut-offs? I want to change my clothes right now! And why does it smell like something just died here?? Probably me: no shower, and too much time with those irritating dwarves. Would Darla think to ask where I?d been for the past few hours? ?Look, why don?t we go back to this? place I heard about?? Darla didn?t need to know that Gwynyin?s place was inside a tree. ?We should?? ?We should get home!? She aimed her finger at me, and her voice ramped up an octave. ?What?ll our moms think when they learn we fell down a HOLE! DID YOU CONSIDER THAT?? ?It wasn?t a hole. I told you. It?s called a portal. Why did you want to stop me from coming here, anyway?? ?Are you brain dead? I was trying to save you from falling. It looked like a hole. How was I to know where it went?? ?So now we?ve got a problem, because I?m not sure you can get back.?