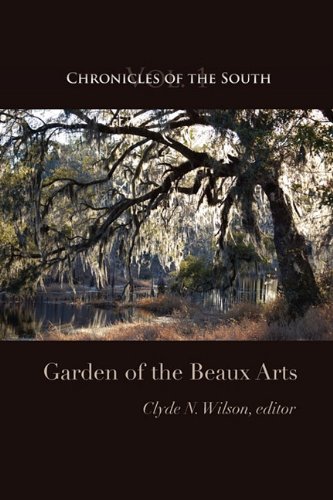 Chronicles of the South: Garden of the Beaux Arts

Chronicles of the South: Garden of the Beaux Arts

"Generally, the Southern writers allowed into 'mainstream' publications are either those who have made a career out of libeling the home folks or those too important to be ignored. Amazingly and refreshingly, Chronicles has not only treated Southern subjects abundantly and fairly but has welcomed many Southern writers who are not among the great but who have something to say and can say it well." So writes Clyde Wilson in his Introduction to Garden of the Beaux Arts, the first volume of Chronicles of the South, a collection of articles from Chronicles: A Magazine of American Culture. Published in Rockford, Illinois, Chronicles has nevertheless been home to some of the best writing on the South over the last quarter of a century. Volume One features contributions by Southern novelists and poets, including Donald Davidson, Madison Smartt Bell, Fred Chappell, and Walker Percy; scholars such as M. E. Bradford, Ward Allen, Russell Kirk, J. O. Tate, Grady McWhiney, Tom Landess, Mark Royden Winchell, and Donald Livingston; and politicians and commentators, including U. S. Rep. John J. Duncan, syndicated columnist William Murchison, and Chronicles editors Aaron D. Wolf, Clyde Wilson, and Thomas Fleming.