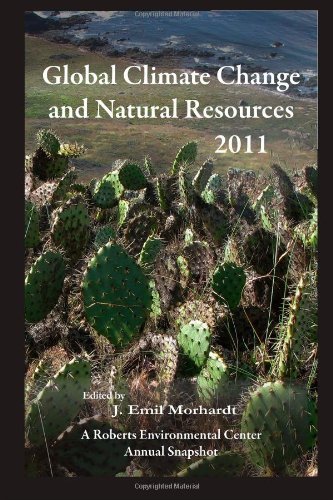 For the past several years my students and I have been examining the state of global natural resources, particularly in light of global warming and climate change, each year producing a book similar to this one, but based only on scientific technical literature published within the past year. The books are similar in format, but entirely new in content?nothing in the current volume was known (at least in the sense of having been published in the peer-reviewed technical literature) before 2010. The gestation period of these books is very short by commercial publishing standards. The writing for this one was initiated at the end of January, 2011, and the final work was published and available for purchase at Amazon.com by the middle of May, 2011. Many of the scientific papers reviewed in it were published, or made available online in prepublication format, during the course of the writing. Most books cover material at least a year old. This one will be superseded by another, more recent one of ours by a year from now. If you are reading this before our next book comes out in May, 2012, you are reading material not likely to be found in most other books. Global warming and climate change are real and natural resources are becoming limiting. The global peak of oil production may already have passed, and certainly will be in the next two decades?as discussed in Chapter 1?and gasoline at the corner station here in Claremont is well over $4.00/gallon again and going up daily. This week The New Yorker has an article about the massive new oil production in North Dakota, facilitated by hydrostatic fracturing of the rock, but even with this advanced ?fracking? the fields will only provide enough oil to supply the U. S. for two years, and the new oil isn?t likely to lower oil prices any, or change the date of peak oil. In 2001, Lomborg also disavowed any adverse biological effects of human activities?but as I found out personally when he visited my lab, he isn?t a scientist, so he missed much of the subtleties of the research in biological areas. There is, in fact, no question that the World?s ecosystems and many of its species are increasingly stressed, and we were already likely to find ourselves on a biologically much simpler planet from human population pressures alone, even without the additional stresses of CO2-induced ocean acidification and climate change. By mandating biological fuels we are likely making things worse, for even more land is being cleared to produce them. There are many other issues related to natural resources and climate change as well, and although this book doesn?t cover them all, it will give you a broad insight into the current state of many of our natural resources and how they may be affected by global warming and climate change. The first section looks at the state of energy production, along with a chapter on alternate vehicle fuels and how we as a society might deal with the excessive CO2 in the atmosphere. The second section is about melting ice sheets and glaciers, how water supplies are responding, and how agriculture is doing in the face of the changes. The third is about the ecological effects of climate change?there are many. There is plenty of interesting information in these pages, and you will come away with a nuanced understanding of the issues, and a better appreciation of the difficulties in finding solutions.