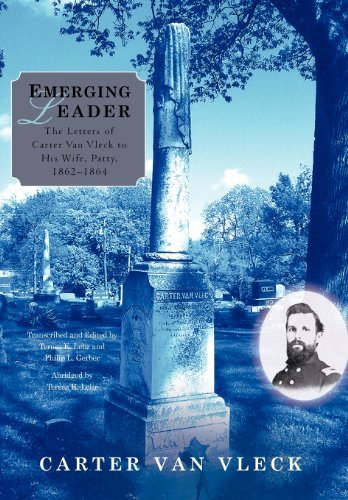 On October 19, 1862, Lieutenant Colonel Carter Van Vleck wrote to his wife and daughter:

It takes an immense amt. of study to learn well the art of killing people, without getting killed yourself And that is the great secret of war, to kill & cripple the enemy to the greatest degree with the least possible damage to those under your command It is a fearful yet a very pleasent study I like it much better than I expected to & much better than any thing else I ever studied or practiced.

How I should like the sad realities of war, or how I should demean myself in an actual fight, of course I have as little idea as anyone else that knows me I might disgrace myself & family forever or might win honors worthy to be won.

During the next two years, the young officer would detail his Civil War experiences in intimate letters to his "whole heart's love," Patty, and their daughter Nellie. The letters reveal both the external challenges Van Vleck faced and his personal conflicts: the urge to eliminate slavery by serving his country well and the longing to return to his loved ones.