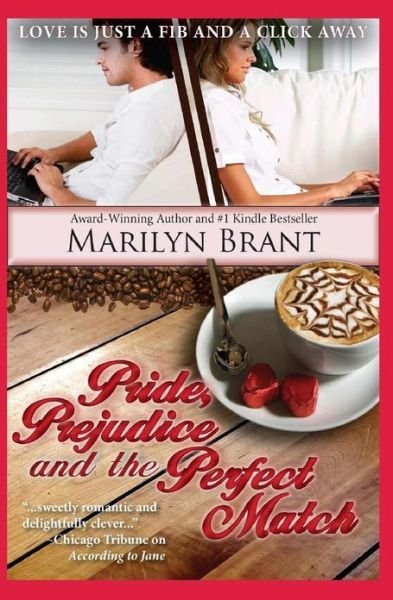 Pride, Prejudice and the Perfect Match

Pride, Prejudice and the Perfect Match

Publisher Marketing: Read the latest contemporary romance by national bestselling author Marilyn Brant: A single mother and an ER doctor meet on an Internet dating site-each for reasons that have little to do with finding their perfect match-in this modern, Austen-inspired story. It's a tribute to the power of both "pride" & "prejudice" in bringing two people romantically together, despite their mutual insistence that they should stay apart... Would an Elizabeth Bennet by any other name be as appealing to a Darcy? Beth Ann Bennet isn't looking for love. She's an aspiring social worker using an online alias to study sex-role stereotypes. Dr. William Darcy isn't looking for love either. He's just trying to fund his new clinic by winning a major bet. Both think Lady Catherine's Love Match Website will help them get what they want-fast, easy and without endangering their hearts. Both are in for a big surprise. Pride, Prejudice and the Perfect Match...where true love is just a fib and a click away. "Brant couldn't have done a better job at pulling me into the story and keeping me hooked until the end... I liked this book so much that I delayed watching the Season 3 premiere of Downton Abbey!! (This is a huge deal.)" Kimberly Denny-Ryder, Austenprose Heart-warming, tender, and sweet - Pride, Prejudice and the Perfect Match is a lovely tribute to Jane Austen and her masterpiece." Austenesque Reviews Praise for Marilyn's debut novel, According to Jane: "A charming book." Family Circle "Fresh, original, and lots of fun." Barnes & Noble Review "Brant infuses her sweetly romantic and delightfully clever tale with just the right dash of Austen-esque wit." Chicago Tribune Contributor Bio:  Brant, Marilyn Marilyn Brant is a New York Times & USA Today bestselling and award-winning author of contemporary fiction, and she was named the 2013 Author of the Year by the Illinois Association of Teachers of English. She wrote ACCORDING TO JANE, the story of a modern woman who receives dating advice from the spirit of Jane Austen (October 2009); FRIDAY MORNINGS AT NINE, a tale about three suburban moms, their marriages and what happens a decade or two after the "Happily Ever After" (a Doubleday Book Club and Book-of-the-Month Club pick in 2010); and A SUMMER IN EUROPE, a novel about a woman's journey of self discovery as she travels through Europe with her adventurous aunt's Sudoku & Mahjongg Club (a Literary Guild and BOMC2 featured alternate in 2011, and a Rhapsody Book Club Top 20 Bestseller in "Fiction & Literature" in 2012), all women's fiction releases from Kensington Books. She's also a #1 Kindle & #1 Nook Bestseller and has written a series of fun and flirty contemporary romantic comedies, available as original ebooks. ON ANY GIVEN SUNDAE and PRIDE, PREJUDICE AND THE PERFECT MATCH were Top 100 Bestsellers on both Barnes & Noble and Amazon. THE ROAD TO YOU, a coming-of-age romantic mystery (October 2013), was a Top 100 B&N Bestseller. PRIDE, PREJUDICE AND THE PERFECT BET (July 2014) is her latest romance, and many of her novels will soon be available as audiobooks from Post Hypnotic Press. Look for them in late 2014 and beyond. As a former teacher, library staff member, freelance magazine writer and national book reviewer for Romantic Times, Marilyn has spent much of her life lost in literature. She received her M. A. in educational psychology from Loyola University Chicago, dabbled in both fiction and art at Northwestern University, studied the works of Austen at Oxford University and is a Lifetime Member of the Jane Austen Society of North America. Her debut novel won RWA's prestigious Golden Heart Award(r) in 2007 and a number of awards since -- including the Single Titles Reviewers' Choice, the Booksellers' Best and the Aspen Gold. Marilyn lives in the northern Chicago suburbs with her family. When she isn't rereading Jane's books or enjoying the latest releases by her writer friends, she's working on her next novel, eating chocolate indiscriminately and hiding from the laundry. Visit her website: www.marilynbrant.com