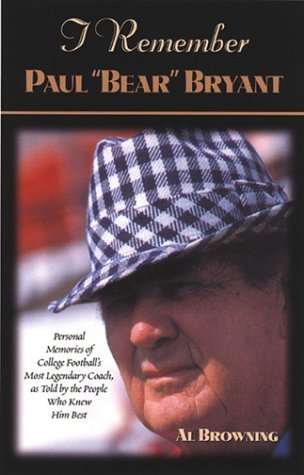 I Remember Paul Bear"" Bryant"": Personal Memoires of College Football's Most Legendary Coach, As Told by the People Who Knew Him Best

I Remember Paul Bear"" Bryant"": Personal Memoires of College Football's Most Legendary Coach, As Told by the People Who Knew Him Best

Paul Bear"" Bryant was arguably the greatest football coach in the history of college football. Beloved by fans of the Alabama Crimson Tide, by the time he retired from coaching following the 1982 season, his teams had won 323 games, a feat unmatched by any coach in college football history. Before arriving in Tuscaloosa, he had coached at Maryland, Kentucky, and Texas A&M; his teams at Alabama won six national championships and thirteen Southeastern Conference titles.

On July 17, 1981, Coach Bryant sat in his office at Memorial Coliseum reminiscing with sports columnist Al Browning of the Tuscaloosa News. Contemplating the twilight of his career, he calmly said, ""They'll forget me as soon as I croak and am buried"". When Browning objected, Coach smiled slightly and said, ""No, that's the way it is. Life moves on, and people find interest in other things"".

While Bryant's memory may have faded slightly, he certainly has not been forgotten, and I Remember Paul ""Bear"" Bryant is a glowing testimony to the love that those who knew him best continue to have for him to this day. Here dozens of his contemporaries, former players, childhood friends, family, competitors, opponents, and his ""boys"" offer in their own words their favorite memories of this man they loved so much. They recall ordinary moments as well as extraordinary ones; they recall moments of joyful victory and bitter defeat; they recall memories of the gridiron discipline he dished out and the thoughtful, helpful guidance he offered to his players, even long after they had graduated and gone on to their own careers.

While Bryant has moved on from this life, he has not been forgotten, and the personal memories included in IRemember Paul ""Bear"" Bryant proves it beyond doubt.