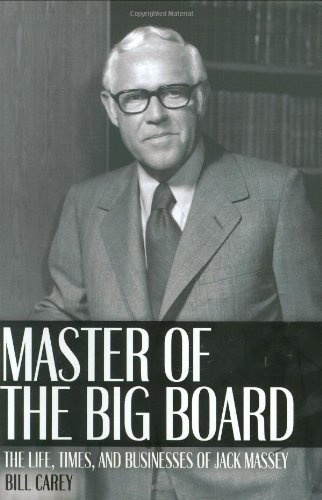 Master of the Big Board: The Life, Times, and Businesses of Jack C. Massey

Master of the Big Board: The Life, Times, and Businesses of Jack C. Massey

Jack Massey is one of the unsung heroes of American business. To this day he is the only person ever to take three companies to the New York Stock Exchange?Kentucky Fried Chicken, Hospital Corporation of America, and Winner's Corporation. According to Forbes, he "deserves credit for creating the modern fast-food industry." He should get credit for for-profit hospitals as well. The list of people who claim Massey as a mentor includes one U. S. senator, two former Tennessee governors, and the Wendy's founder Dave Thomas.

Incredibly, Massey did all of this after he tried to retire.

Massey spent his childhood working in his uncle's drugstore in small-town Georgia. Passing the pharmacy exam and receiving his license at age 19 (two years below the minimum legal age), Massey built up a chain of drugstores in Nashville, which he expanded into a surgical supply business in 1937, and became a bank director and head of Nashville's Baptist Hospital. In 1961 he sold his surgical supply company and retired.

After a few months of golf and gin rummy in Florida, he was ready for a new challenge, which he found in an eccentric old Kentuckian with a fried chicken recipe. Massey bought Harland Sanders's recipe, and under his leadership Kentucky Fried Chicken grew into a nationwide chain of restaurants. By the time he sold KFC, Massey had also started a chain of for-profit hospitals with three other Nashvillians: Hospital Corporation of America.

By the late 1970s and past retirement age, he was instrumental in the rise of Wendy's, had helped a Nashville entrepreneur buy Thomas Nelson, Inc., and transformed a small Nashville college now known as Belmont University. In the 1980s he started the highly successful Massey-Burch investment capital company, took a leading role in local real estate development, and started a fried chicken chain called Mrs. Winners, which he took to the NYSE in 1984.

Master of the Big Board is the story of an incredible American life. Dozens of lessons about life and business can be realized from this detailed, accurate, and thoughtful business biography.