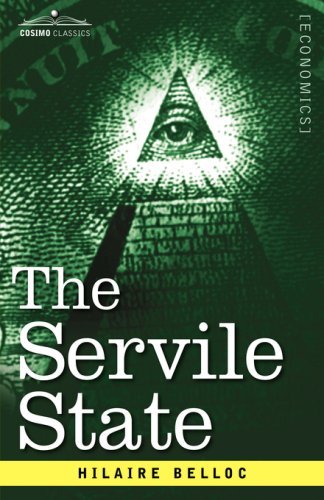 The Servile State, published in 1912, is Hilaire Belloc's foray into economic theory and philosophy. In it he promotes the idea of "distributism," as opposed to capitalism and socialism. "The servile state is that in which the mass of men shall be constrained by law to labor for the profit of a minority," Belloc says. And this state is the ordinary and natural ends of both capitalism and socialism, though they may arrive there by different routes. In contrast, Belloc envisions a society in which each individual strives to be the owner of means of production, rather than a worker who merely earns wages. By owning what he needs to make his living, man can experience true freedom. It has happened before, he says, most notably in Britain before the Protestant Reformation. Modern readers will hear many echoes from Belloc in today's campaigns for co-ops and locally-owned businesses, which seek to replace large corporations with smaller operations that more adequately distribute wealth. Students of economics and history, as well as those interested in politics and the effects of economics on society, will find this a thought-provoking and galvanizing read. French writer and thinker HILAIRE BELLOC (1870-1953) is known as "the man who wrote a library." He expounded extensively on a number of subjects, including French and British history, military strategy, satire, comic and serious verse, literary criticism, topography and travel, translations, and religious, social, and political commentary. Among his most famous works are The Path to Rome (1902) and Emmanuel Burden (1903).