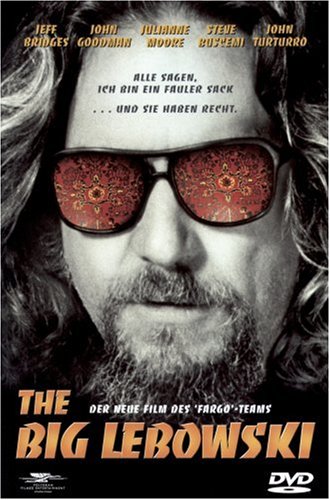 The Coen brothers have done it again. Mixing in Leninist philosophy, mistaken identity, crazy characters, a kidnapping plot, and a deep love of bowling, they have unleashed upon an unsuspecting world the many glories of THE BIG LEBOWSKI. Jeff Bridges plays Jeff Lebowski, known as the Dude, a laid-back, easygoing burnout who happens to have the same name as a millionaire whose wife owes a lot of dangerous people a whole bunch of money--resulting in the Dude having his rug soiled, sending him spiraling into the Los Angeles underworld. The film is beautiful to look at, especially the scenes in the bowling alley, which feature a vast array of bizarre characters including Steve Buscemi, John Turturro, Sam Elliott, and the movie-stealing, riotously funny John Goodman as the Dude's crazy best buddy. As usual in Coen brothers films (BARTON FINK, RAISING ARIZONA), the dialogue is hysterically warped; the plot is confusing, complicated, and kinetic; the soundtrack is virtually another character; and the acting is weirdly stellar. THE BIG LEBOWSKI is yet another thoroughly entertaining foray into the strange and fascinating world ruled by Joel and Ethan Coen.