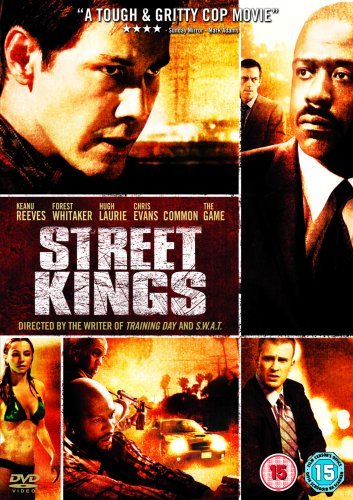 David Ayer, who wrote TRAINING DAY, gives us another unflinching look at disillusionment and questionable decision-making within the ranks of the LAPD. Ayer's second directorial effort tells the story of burnt-out Tom Ludlow (Keanu Reeves), a functioning alcoholic and undisciplined detective with the Special Vice Unit. While so much of this characterisation appears resonatingly familiar at first, we soon learn that the character here has been tweaked. While this loose cannon in no way does things by the book, he is also far from playing by his own rules. Ludlow is relied upon by the other detectives in the unit, and by their almost maniacally ambitious Captain Wander (Forest Whitaker), to go outside the law whenever needed. The infractions he is pressured to commit are quickly and uncomplainingly covered up by Captain Wander, while Ludlow and the rest of Special Vice receive accolades for their high clearance rate. Not until one of these cover-ups leads to the brutal murder of his ex-partner (Terry Crews) does Ludlow try to dispel the apathy (and the vodka fumes) clouding his purpose. This procedural melodrama is almost completely internalized within the LAPD, as Vice cops investigate Narcotics cops, who snitch on Homicide cops, and no one talks to Internal Affairs, etc. Crimes are staged, executed, and pinned firmly on suspects with alarming efficiency as the necessary DNA, murder weapons, and fingerprints are then sprinkled around the scenes after the fact.
A study in familiar elements slightly skewed, STREET KINGS provides a satisfying dose of bright, loud, violent police work blended with the right amount of discreetly passed interoffice envelopes to keep the taut intrigue in step with the body count. Little time is wasted on exposition, and the audience's ability to extrapolate is given a great deal of credit as Ludlow's dead wife, substance abuse, and past career troubles are flashed at us briefly, then put away in favour of the crisis at hand.