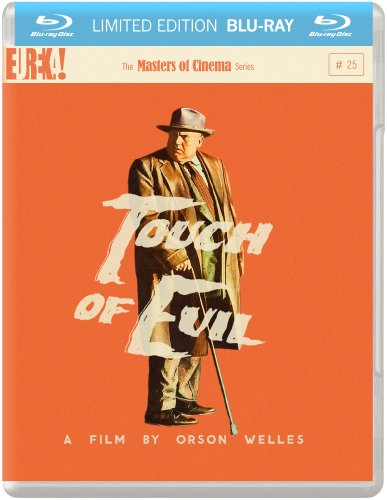 Orson Welles's TOUCH OF EVIL is nothing short of a masterpiece. Beginning with a three-minute-plus tracking crane shot, the film explodes onto the screen, literally--the marvelously expressive opening shot ends with a car blowing up, and that detonation sets into motion a classic noir tale of betrayal and murder. In a complex exploration of character and morality, Welles plays the racist Captain Hank Quinlan, a grotesque, troubled, and powerful figure who runs his small U. S. border town according to his own version of the law. Quinlan's brutishness and vulgarity contrast starkly with the idealism and playboy good looks of Charlton Heston as Mike Vargas, a Mexican detective trying to put away the leader of a dangerous family of drug dealers--the Grandis. In the U. S. with his new bride, Susie (Janet Leigh), Vargas becomes consumed with exposing Quinlan and his highly questionable methods--too busy to see that his own beautiful blonde bride is in serious danger from both Quinlan and the Grandis. Every shot is impeccably crafted, every word of dialogue concise and pointed. The camerawork (by Russell Metty and John Russell) is stunning, particularly in the opening scene and the long single take in which Vargas believes he has caught Quinlan planting evidence. The supporting cast, led by Marlene Dietrich, Dennis Weaver, Akim Tamiroff, and Joseph Calleia, gives exhilarating performances. TOUCH OF EVIL, Welles's last studio film, is a near-perfect examination of the dark underbelly of society and the tragic downfall of a once proud man.