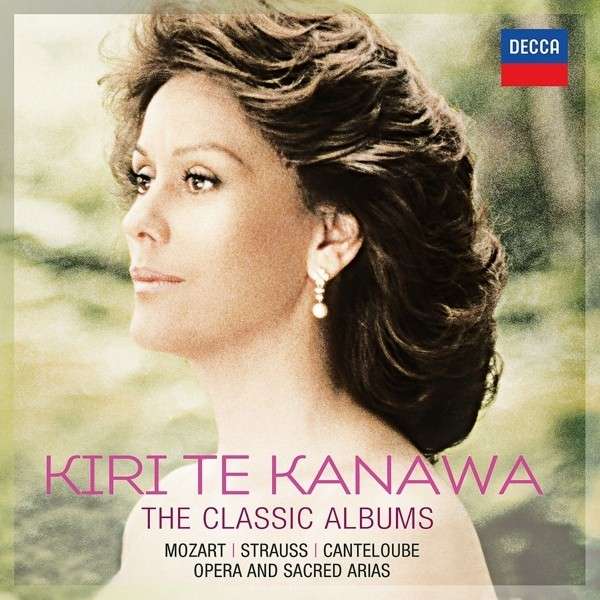 I anledning af den kendte soprans 70 års dag udsendes et bokssæt med et bredt udpluk fra hendes klassiske virke. Kiri Te Kanawa er en yderst værdsat sanger . Foruden næsten at have opnået ikonstatus inden for den klassiske opera har Kanawa også sunget musicals. Mest kendt er partiet som Maria i indspilningen af Leonard Bernsteins "West Side Story", hvor hun syger op mod José Carreras. 'The Classic Albums' is a 70th birthday tribute celebrating the many facets of Dame Kiri Te Kanawa's art "Her legacy is substantial, her popular following immense.... Her voice and personality have ensured that the name Kiri Te Kanawa is known the world over, not only in the hallowed shrines of opera, but also by the man in the street who clearly knows a beautiful voice when he hears one." Gramophone This 6 CD set is a 70th birthday celebration of an artist who has had an astonishing career, captivating audiences the world over, from the opera stage to fame on the small screen.. Recently appearing in the third series of Downton Abbey, she clearly shows no signs of slowing down her schedule. Her performance of Handel's 'Let the bright Seraphim' at the 1981 wedding of Prince Charles and Lady Diana Spencer reached an international audience of 600 million and catapulted her to stardom. She carved her distinguished reputation with the critics through the music of Mozart and Richard Strauss. Two discs in this set are dedicated to these two composers, and her fruitful relationship with conductor Sir Georg Solti. But as this 6 CD birthday set shows, these two composers comprise only a part of the story. The qualities of Dame Kiri's voice are just as easily recognised in the song repertoire as in opera. Canteloube's Songs of the Auvergne are present in this collection, as well as a song recital with the distinguished accompanist Roger Vignoles which crosses a variety of musical periods and styles - Purcell through to Liszt, Ravel and Rachmaninov and Granados. "Hers is one of those immaculate voices that sounds effortless - whatever the hard work involved in creating such an instrument in the first place, let alone in maintaining it in pristine condition over a busy career with all the stress of travelling as well as performing for several decades... For those who have come to love her singing, and the many that will encounter her recordings with delight over the years to come, there is indeed a great deal to celebrate." George Hall Tracklist: CD 1 Canteloube: Chants d'Auvergne (Vol.1) English Chamber Orchestra, Jeffrey Tate CD 2 Mozart: Opera Arias London Philharmonic Orchestra, Sir Georg Solti CD 3 Ave Maria: Sacred Arias Choir of St Paul's Cathedral, English Chamber Orchestra, Barry Rose CD 4 Kiri In Recital Roger Vignoles (Piano) CD 5 Strauss: Four Last Songs Wiener Philharmoniker, Sir Georg Solti CD 6 Opera Arias by Verdi, Puccini, Strauss & Gounod Luciano Pavarotti, Alfredo Kraus, Sir Georg Solti, Sir Colin Davis, Riccardo Chailly, etc