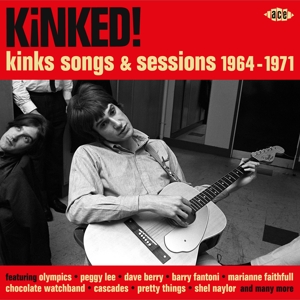 Ray Davies is one of the greatest songwriting talents that Britain has ever produced. From his earliest days with the Kinks he was tremendously prolific. His wry take on the British way of life was matched by uncanny melodic and commercial sensibilities, resulting in a body of work that remains unsurpassed. From You Really Got Me on, the Kinks popularity and influence across the globe has been huge, ably demonstrated by the many covers of Davies songs. Kinked! Kinks Songs & Sessions 1964-1971 is an alternative celebration of the Kinks first decade, via the songs that got away, when a surfeit of strong material was shopped by Davies then-publisher and management, both in the UK and overseas.

he range of interpreters is wide, from pop-jazz chanteuse Peggy Lee and teen idol Bobby Rydell to Brit-girls the Orchids and Goldie & The Gingerbreads, UK mainstays Herman's Hermits and the Pretty Things, sessioneer Nicky Hopkins, satirist Barry Fantoni, US garage punk avatars the Chocolate Watchband and R&B veterans the Olympics.