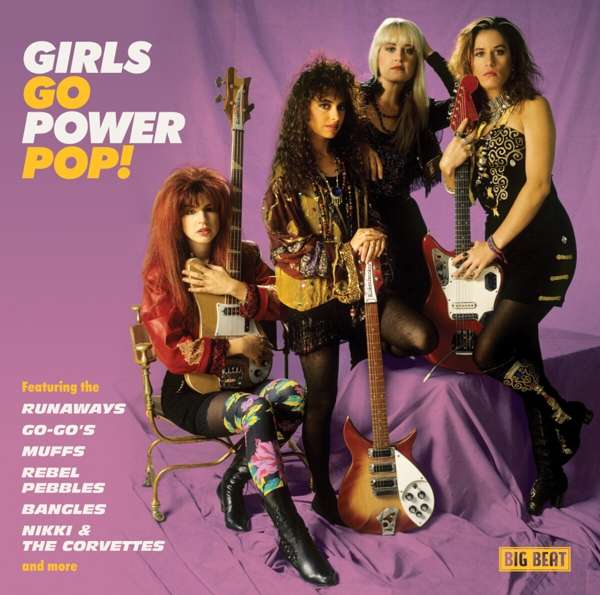 o "Come On Let's Go!", our survey of power pop gems from the 70s and 80s, was one of Ace's best sellers of 2019, with critics lavishing four and five star reviews upon the compilation. However, we grew to rue the lack of the female voice on the CD, with the Shivvers being the sole representative. With that in mind, we now unveil "Girls Go Power Pop!", an entire collection of feminine decks from the 80s and 90s, all delivered with the kind of sassy pizazz you would expect from acts such as the Bangles and the Go-Go's.

o Not that you get the expected hits by those fab bands. Instead we feature the Bangles' little-heard second 45, 'The Real World', which is far more earthy than the glossy hits that followed; and, while you do get the Go-Go's' 'We Got The Beat', it's the scarce Stiff version, which has far more, well, beat than the hit remake. We also have the original Textones' recording of 'Vacation', a song later taken to the US Top 10 by the Go-Go's.

o For those who like to discover more obscure names there are little-known delights from Fuzzy, the Little Girls, the MnMs, Universal Honey and the "B" Girls, which all bristle with invention and quirky pop appeal. Influences come from far and wide, often harking back to earlier times. Mick Jones of the Clash produced the "B" Girls' 'Boys Are Drinking', but band member Cynthia Ross declared "We were lumped in with punk, but we were pop" - indeed, their main influences were the Ronettes and the Shangri-Las. Similarly, Nikki & the Corvettes "wanted to be the Ramones meets the Shangri-Las".

o The Pandoras and the Muffs represent the garage band end of the equation, although they inject the essential quality of pop melody into 'That's Your Way Out' and 'Everywhere I Go'. On the other side of the coin, pure pop confection is brought to us by the Rebel Pebbles' enchanting 'Dream Lover', Josie Cotton's beguiling revival of the Looking Glass' 70s hit 'Jimmy Loves Maryann', and Scandal's ultra-catchy 'Goodbye To You', which clings like sugar to a jam donut.

o We predict that "Girls Go Power Pop!" is destined to be loved by fans of power pop and cherished by aficionados of girl-pop. Anyone with an ear for a good tune and a taste for snappy, guitar-based pop should grab this real fast.