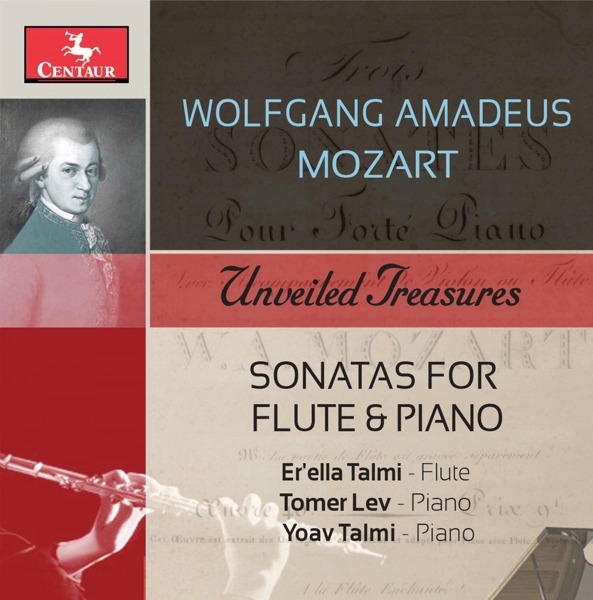 An album with four sonatas by Wolfgang Amadeus Mozart. Three of them are arranged for flute and piano by Ludwig Wenzel Lachnith (1746-1820). Yoav Talmi made the arrangement of the fourth sonata for the same instruments. All in all, this album has turned out well in this form. Flautist Er'ella Talmi, accompanied by her husband Yoav Talmi and Tomer Lev on the piano, have made it into a fine and tranquil whole. A pleasure to listen to.

The gifted flautist Er'ella Talmi was born in Israel. She graduated from Julliard School of Music in New York. She has performed with many high-profile orchestras in America and Europe. Since 1992 she has served as the music director for the "Tones and Colors" series in Tel Aviv. She is the wife of Yoav Talmi, who has arranged the fourth Sonata on this release.

Yoav Talmi is a well-known and celebrated conductor. His long and impressive career spans several continents. Talmi saw the light of day in the kibbutz Merhavia in Palestine. He studied composition and orchestra direction at the Rubin academy in Tel Aviv and went to Julliard in New York later on. Talmi was, amongst others, principal conductor of the Gelders Orkest and is a sought after conductor throughout the world. He composed the official march of the Israeli army, Tsahal Tso'ed, an elegy for strings, timpani and accordion. In 2008 he directed a historical performance of the Eight Symphony by Gustav Mahler to mark the 400th anniversary of the city of Quebec in Canada. His baton directed thousands of musicians. Four orchestras, fifteen choirs and eight soloists were gathered for a spectacle which drew 12.000 visitors to the Quebec Coliseum.

Ludwig Wenzel Lachnith (Prague, 1746 - Paris, 1820) was not only a virtuoso horn player, but also a versatile composer. In his chamber works he was influenced by Joseph Haydn and Ignaz Pleyel. He is primarily known for his arrangements of operas. His arrangement of the music and libretto of Mozart's Zauberflöte was a resounding success. The French composer Hector Berlioz thought differently about it, however, and even devoted a tirade to him in his autobiography.