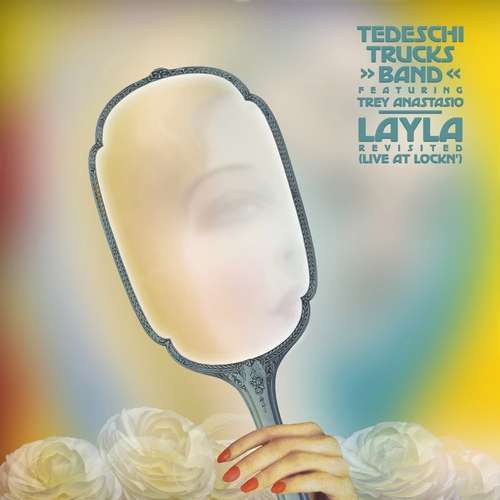 Limited to 1 pcs. per customer

Limited colored pressing - we don't know how many copies we will receive. Delivery can't be guaranteed.

The cosmic connections are inescapable. On November 9th, 1970, Eric Clapton and his new band, Derek and the Dominos released what would become one of the most celebrated albums of all-time, Layla and Other Assorted Love Songs. As fate would have it, on that very day, a future musical prodigy named Susan Tedeschi was born. Some years later with Layla firmly entrenched among the pantheon of rock classics, avid Dominos fans Chris and Debbie Trucks paid homage to the band by naming their newborn son Derek. They played the album for Derek as bedtime music, sowing the seeds for the musical path that lay ahead. The rest as they say, is history. Derek and Susan would go on to form one of rock's most treasured partnerships, Tedeschi Trucks Band.

Now the Tedeschi Trucks Band is set to release Layla Revisited (Live at LOCKN') featuring Trey Anastasio, a complete live performance recording of the seminal masterwork that has been integral to their musical foundation. Recorded Saturday night, August 24th, 2019 in Arrington, VA, Layla Revisited (Live at LOCKN') captures TTB at their incendiary best. The band's collaboration with Phish's renowned guitarist/vocalist, Trey Anastasio, was one of the four-day music festival's most anticipated performances. Simply billed as Tedeschi Trucks Band featuring Trey Anastasio, fans were kept in the dark about their plans to perform the Layla album in its entirety until the moment the band took the stage. One listen and it's clear that their surprise performance-which also included close TTB collaborator, guitarist and songwriter, Doyle Bramhall II-meant something extra special to both the musicians and the astonished fans who were lucky to experience it.

In the new album's liner notes, Trucks recalled, "The joy of playing these songs that we all cut our teeth to...is something I will never forget. The show went so well, I was a little worried about going back and listening to the recordings. Sometimes things just don't hold up to your memory of it. But this did. Maybe even better."

The elevated intensity and musicianship is evident from the very top as Anastasio and Tedeschi take the band through "I Looked Away" and "Bell Bottom Blues", Layla's lead tracks. "Keep On Growing," which has become a TTB setlist favorite, then delivers what every fan had been waiting to see for months - the fiery guitar interplay between Trucks and Anastasio - reminding us all why they are indisputably two of the greatest masters of the instrument.

Guitar lovers will undoubtedly hear the influence of another guitar master in Truck's playing throughout the evening, Duane Allman. Allman contributed to 11 of Layla's 14 tracks and his brilliant work on the album remains "one of the high-water marks" Trucks points out in the liner notes. In another sign of kismet, Trucks played his 1957 Gibson Gold Top guitar during the Layla Revisited set; the serial number of that guitar is one number away from Allman's '57 Gold Top used on the original album recording.

The bluesy "Nobody Knows You When You're Down and Out," is followed by a stunningly beautiful rendition of "I Am Yours" with vocals from TTB members Gabe Dixon and Mike Mattison and exquisite Indian-flavored raga guitar work from Trucks. The Anastasio and Trucks interchange in an extended performance on the upbeat "Anyday" features a crescendo of fluid stretched-out solos. Bramhall and Mattison then share soulful lead vocals on Big Bill Broonzy's "Key To The Highway" before "Tell The Truth," and "Why Does Love Got to Be So Sad?" kick the energy into high gear. Tedeschi's commanding work on "Have You Ever Loved a Woman" is another standout, as is Bramhall, Anastasio and Trucks' inspired transcendence on Hendrix's classic "Little Wing."

A heartfelt rendering of "It's Too Late," leads to the live set's grand finale, the title-track "Layla," which uncovers Trucks and Anastasio at full throttle. Truck's incredible slide playing, beautifully embellished by Anastasio's deft fretwork serves as an emphatic exclamation mark to an unforgettable night.

The band knew that there was no better song than "Layla" to end the set, so the original recorded version of "Thorn Tree in the Garden," the last song on the Dominoes album, played over the PA as soothing walk-out music for the elated and astonished fans. To complete this official release, Derek and Susan recorded a lovely acoustic duet version of the track at their home studio in Jacksonville, FL, included as the album closer.

If you like Tedeschi Trucks -Band- & Trey Anastasio, then maybe...