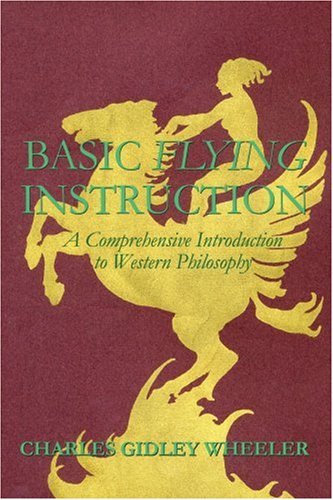 BASIC FLYING INSTRUCTION"Plato compares the human being to a winged chariot driven by a rational charioteer and drawn by two horses, one spirited but amenable to discipline, the other self-indulgent and reluctant to obey commands even when they are accompanied by the whip."Based on his recent philosophy degree course at the University of Durham, novelist, screenwriter, and ex-Navy pilot Charles Gidley Wheeler provides a clear, concise, and comprehensive overview of Western philosophy, its relation to science and logic, and its application to personal, social, and political dilemmas of the twenty-first century. Starting from the premise that nothingness cannot exist, the author shows how both physics and philosophy seem to be leading us to the unavoidable conclusion that to think in terms of an absolute God who has the power to reward or punish us is not only irrational but divisive and dangerous to the survival of mankind. The important conclusion of the book is that until it is universally accepted that we are all one, and that to injure another nation is to injure one's own, wars and terrorism will inevitably continue."Charles Wheeler has had the bright idea of using his own course in philosophy as a framework for an introduction to the discipline, and has written an accessible and lively book getting across his own particular enthusiasm for Spinoza."-David M. Knight, MA, Dphil, University of Durham"Basic Flying Instruction is a book that will help you fly happily through life."-John Weaver, Booksandauthors.net" an excellent book, clearly suitable for a bright school-age pupil."-B. J. Lenon, M. A., Head Master, Harrow School.