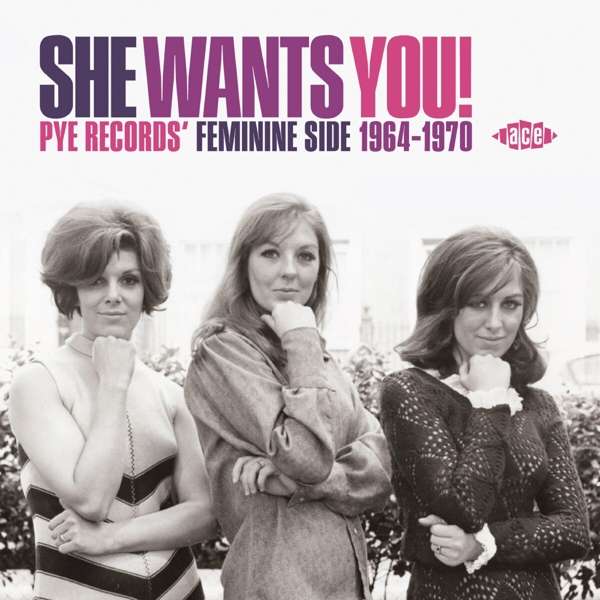 In 2016, Ace visited the Pye catalogue for the "Scratch My Back! Pye Beat Girls 1963-1968" compilation. But it's now 2021, and for the new, or even seasoned, devotee of the Brit Girl genre, four years is a long time to go without a top-up fix. So in a timely gesture of sustenance, we hereby present "She Wants You! Pye Records' Feminine Side 1964-1970", a further selection of tracks from the company's female talent.

The mid-60s was a time when British pop was in transition, with the raw beat and unschooled enthusiasm of the earlier part of the decade making way for more sophistication, in terms of both production techniques and songwriting. The country was now fully aware of the soul of Detroit, the pop of New York and the spirit of California, and elements of these were often incorporated into domestic productions and arrangements, while retaining that unmistakeable British factor.

The singers featured here cover many shades of the musical spectrum, including pop - the Tony Hatch-produced 'You Can Be Wrong About Boys' by Mally Page; beat - Jeannie & the Big Guys' Merseybeat gem 'I Want You'; soul - Billie Davis' kitchen-sink cover of Gladys Knight & the Pips' 'Just Walk In My Shoes'; folk - Dana Gillespie's self-penned 'Adam Can You Beat That'; psychedelia - 'I Can't Break The Habit' by the Ferris Wheel featuring lead vocalist Diane Ferraz; and even a touch of jazz - Anita Harris' 'I Run To Hide'. Other highlights include Petula Clark's fantastic version of the Beatles' 'Rain', the title track from Sandie Shaw's iconoclastic "Reviewing The Situation" album, and Lorraine Silver's northern soul guilty pleasure 'Lost Summer Love'.

Compilation and notes by Mick Patrick and Ian Chapman.