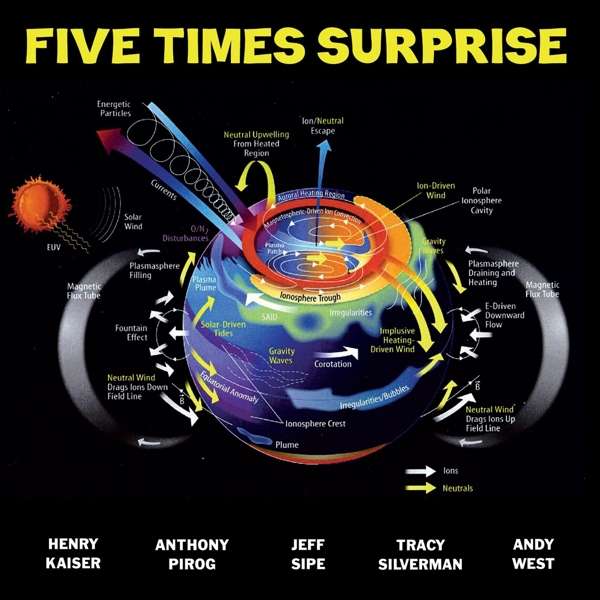 Five Times Surprise brings together a volatile mix of longtime compatriots and newly forged relationships. The distinguished improvisers all boast exceptionally diverse resumes. More than finding common ground, they reveal a vast universe of possibilities fueled by creative conflagration and genre blurring. "We're improvisers who can walk into a room and create something together," says the project's original instigator Henry Kaiser

Henry Kaiser is one of the most prolific and encompassing guitarists of his generation. He's collaborated with many of the most creative and influential guitarists of the past half century, including Fred Frith, Richard Thompson, Nels Cline, Mike Keneally, and David Lindley, with whom he famously ventured to Madagascar in 1991 and collected the music featured on the Grammy-nominated series A World Out of Time. He's released numerous albums on Cuneiform over the years, most recently on 2015's acclaimed guitar summit with legendary British free-jazz pioneer and longtime session ace Ray Russell, The Celestial Squid

Anthony Pirog has been long associated with Washington D. C.'s world-renowned experimental music scene, Pirog is a stylistically omnivorous guitarist ready and able to add his studied but unorthodox voice to just about any musical situation, from jazz, country, fingerstyle and old-time music to free improvisation, free jazz, surf and experimental music. He first recorded for Cuneiform with cellist Janel Leppin on Janel and Anthony's 2012 album Where Is Home, and followed up with 2014's Palo Colorado Dream. Most recently, he has gained attention for his work with The Messthetics, who are touring the world and playing large festivals (including Cochella in April). He is also a member of The Spellcasters, whose debut album is released on the same date as Five Times Surprise.

A founding member of the groundbreaking Turtle Island String Quartet, Tracy Silverman is recognized as the leading voice on electric violin in jazz, classical and new music settings. Composers such as Terry Riley, Nico Muhly, Kenji Bunch, and Pulitzer Prize-winner John Adams have composed violin concertos for him, and Silverman is also a noted composer in his own right. A member of the string faculty at Belmont University in Nashville, he was in many ways the wild card on Five Times Surprise, jumping into the fray with the fearless abandon that has marked his improvisational encounters.

Jeff Sipe has been a driving force in various all-star ensembles for decades and is a drummer with a huge textural palette and deep pocket. He was a founding member of Aquarium Rescue Unit with bassist Oteil Burbridge and guitarist Jimmy Herring in the early 1990s. A few years later he started touring and recording with bassist Jonas Hellborg and Memphis guitar great Shawn Lane, followed by a three-year stint with Leftover Salmon. More recently he's toured and recorded with Project Z, featuring Herring, and the Jeff Sipe Trio with guitarist Mike Seal, and bassist Taylor Lee.

Bassist Andy West first made an indelible mark as a founding member of the Dixie Dregs, providing the essential pulse for the turbo charged band until the original band's breakup in 1983 (and he anchored later incarnations too). He's worked closely with many prodigious musicians over the years, including Mike Keneally, John French, T Lavitz, and Hilary Jones. West and Kaiser's shared discography includes 1986's covers project Those who know History are Doomed to Repeat It and 1995's The Mistakes.